It all came down to a dramatic penalty shootout against Cronulla in the girls Gold Medal match after a draw of 5-5 at full time, in a nail biting, goal for goal game.

This came after a long pre match talk with Olympian and former Polo Bear, Bronwen Knox. In a first for the North Brisbane Polo Bears Club, both a boys and girls Club Team travelled to the 14 & Under Club National Tournaments held on the Gold Coast and at Albury Wodonga.

Our Boys fought hard in every game on the Gold Coast and gave their all throughout the week. Our very own Senior Club member Stevie Yule walked away with the title of ‘Referee of the Tournament’.

Our Girls team, winners of both the 2014/15 QLD State Titles and BWPI Competition, had win after win only to be defeated by the gold medallists, Cronulla. Kate Power, our ‘number 1’ goalie, put in such an outstanding effort she earned herself “Most Valuable Goalie of the Tournament”. Our Girls were thrilled with their place in the competition and would like to congratulate Cronulla on their win. 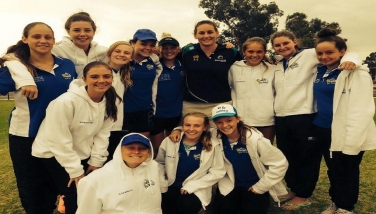