Backup / About / In The Media / Polo Bears the State's Best

Featured in The Westerner - Thursday, 14 November 2013 by Lee Oliver 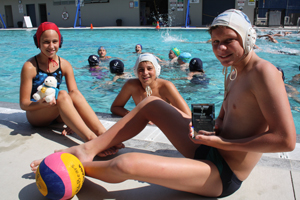 A club nicknamed the Polo Bears has made a big splash at the Water Polo Queensland Awards.  At a gala celebration commemorating 100 years of the aquatic sport in Queensland, the North Brisbane Water Polo Club was named the state’s best club for the first time.

Club President Phil Pettifer said the award win was “unexpected and a nice surprise”.  “It really shows that it’s a team effort by the committee and it reflects all the hard work that our volunteers have put into the club,” he said.

“It’s pretty exciting and it gives you a bit of energy.”

Buoyed by a 21 per cent growth in player membership over the past year, the club’s expansion has seen it adopt the Genesis College Aquatic Centre at Bray Park as a second home pool, along with the Albany Creek Leisure Centre.

The Water Polo Queensland award also recognised the club’s strategic plan, a successful turnaround of its finances and the reintroduction of a Flippa Ball junior development program.

“We hadn’t done Flippa Ball for about five years… until we started it up again this time last year,” Mr Pettifer said.

“We’ve also helped out the other clubs in terms of sharing our knowledge.

“We’ve got really good kids and that comes from the parents obviously, and we’re a family oriented club.”
Formed in 1996 following the amal-gamation of the Pine Rivers, Kallangur and Newmarket clubs, North Brisbane Water Polo has produced Olympians including Billy Miller, Naomi Castle and Bronwen

In a double celebration for the Polo Bears, Knox was named Water Polo Queensland’s Female Athlete of the Year at the awards night.

Knox started at the club when she was 14 and is now the captain of the Australian national team.

The 27-year-old has won bronze medals at the 2008 and 2012 Olympic Games and won a World Cup with the Australian Stingers seven years ago.

Last month Knox, a two-time world championships silver medallist who has also played for a college team in the USA, was named the Queensland Academy of Sport (QAS) Female Water Polo Athlete of the Year.